KEN: Thinking back about Rush's ability to survey landscape, both politically and culturally, it's a gift that he had. People just don't have that gift, and he was doing it in the eighties. He was doing it when he was doing music radio. He had the ability to size up the environment, recon it all, pull out the information we need, and put it there.

That's an ability that very few, if any, people in news have anymore because they're so biased. I think one of the most disingenuous things that I have been observing is all the love and Biden worship over the vaccines when President Trump was on the case a year ago, and he was creating this partnership with private and public and government.

He was fast tracking this, and they were researching that and approving this and that, and then Joe Biden gets installed as the new commissar, and all this is handed to him. And the first thing he says is, "Well, we had to start from scratch -- and if you rub my leg hairs, they're wet." Something like that. I don't know. Kamala explained it better than that. So I want to go yet another I-told-you-so moment that just drive so many of us crazy that really know what's going on. Here it is. 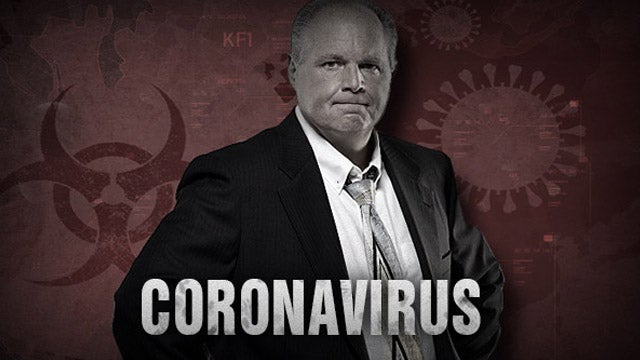 RUSH: We're gonna have to get in gear fast, otherwise this is gonna become the Biden vaccine, it's gonna become the Biden economic recovery. This is what the media is setting up. This is the objective that they all have, particularly if it works. And if it works, they're going to be doing everything they can to make people think that this vaccine only happened because of Joe Biden.

When Joe Biden had nothing -- I mean, zero, zilch, nada, nothing -- to do with it. Trump is not getting criticized for this vaccine, and it bums me. He's addressing Operation Warp Speed at the vaccine summit. He's talking about this now, delivering remarks on Operation Warp Speed. I want the guy to get the credit that he deserves. Let's JIP this now because our microphones are there.

PRESIDENT TRUMP: Scientists in the might of American industry to save millions and millions of lives all over the world. We're just days away from authorization from the FDA, and we're pushing 'em hard, at which point we will immediately begin mass distribution. Before Operation Warp Speed, the typical timeframe for development and approval, as you know, could be infinity.

And we were very, very happy that we were able to get things done at a level that nobody has ever seen before. The gold standard vaccine has been done in less than nine months. On behalf of the entire nation I want to thank everyone here today who has been involved in this extraordinary American initiative. 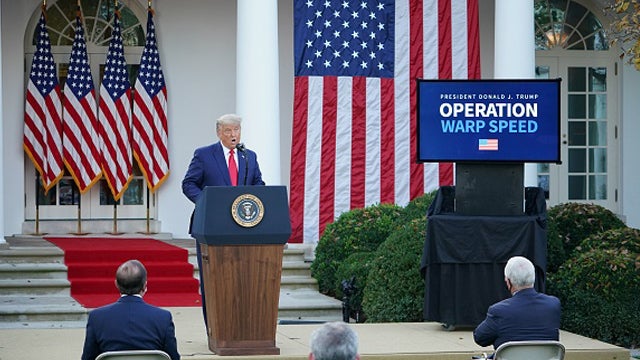 RUSH: I just wanted to get this on record as the Trump vaccine. They're trying to call this the Biden vaccine; they're gonna keep trying to call it the Biden vaccine. I wanted you to hear this. I didn't know what it was gonna be, but I'm glad he recognized all of those people who had a role in making this vaccine come to market. This is unprecedented. There's never been a vaccine hit market in less than a year like this. This really is unprecedented.

KEN: So when you think about how the news media coddles and protects Joe Biden, and how they work every day -- they're still doing it -- to destroy President Donald Trump,m this is what's so... I don't know. I think it's criminal, but obviously that's just my opinion. It's just so over the top. When you and I and Americans all needed the news media to give us information about what was going on.

Whether it was an election, whether it was a false flag Capitol Hill cluster -- or whether it was a flu out of control that's been hyped up, miscategorized; tested falsely with a PCR that can be adjusted; death cases that were lied and manipulated; hospital bed numbers that were manipulated -- in the middle of this, you have incompetent leftists actually making decisions that are causing people to die.

When the majority of Americans are going, "You know, I think I had something like this. Didn't Aunt Becky have something like this about three years ago?" "Yeah. She did that concoction she does with the apple cider vinegar, and she takes a bunch of zinc, and then she has a bunch of fresh air, and she's back on her feet in three days."

No, you can't do that. You must be afraid. You must be very afraid! Fear. False evidence appearing real or accepted as reality. That's the power of fear. Fear is the only thing the leftist ideology has as fuel. There is nothing on the left that if you broke it down and you calmly discussed it with someone, it would make sense.

You would get halfway through a leftist ideology. Whether it's the green movement, whether it's the minimum wage, you'd get halfway through, and you'd say, "What the heck are you talking about, dude? You're not making any sense." So before you have an opportunity to hear how toxic a leftist policy is, they're calling you a name -- and it's worked for 50 years for them.

KEN: John, Oregon. Hi, John. You're on the EIB Network.

CALLER: I haven't waited on hold this long willingly since I canceled my DISH Network. So, anyway -- (laughing)

CALLER: So I want to say this. I applied for half a million dollars of term. I'm 62 years old. It's serious business. So the insurance company wants to make sure it's all good, so they sent out a nurse. She weighed me, measured me, took an EKG, blood, urine, family history, AIDS, venereal disease, everything. Diseases I never heard about was asked about. But guess what? Not one peep about COVID.

CALLER: That sort of hit a note with me. It made me realize what's really going on.

KEN: Did it make you realize, John, that so many people in the medical profession know what's going on but their leaders -- the leadership and their employers -- have told them, "Ah, ah, ah! You don't need to talk about it." I remember with the hospital numbers that allegedly started to spike due to COVID, and I would have nurses call me anonymously or they'd send me messages.

"Please, please, don't mention my hospital, don't mention my name. But I gotta tell you, we got, you know, 75 beds open here. We're not even full." And I thought, "Something's not right here, and that's been going on across the country." But again, John, where was the media? They could have been doing stories on this just like your call.

KEN: What a great story that is.

CALLER: Yeah, it really tells you. You know, the disease is real, but what the manipulation of it for political gains is just sickening.

KEN: Well, I think one of the biggest causes of COVID is just watching television.

KEN: Once you eliminate that --

KEN: There you go. You sound so much healthier now. Thank you so much for calling, John, and good luck. 800-282-2882. What another great example -- and I can tell you right now, you're not gonna hear that on other platforms anymore because the word has gone out. The word has gone out. You're not supposed to question the vaccine.

You're not supposed to question any type of process or information with COVID. And God help you in Pennsylvania if you mention a stolen election. I don't know if you heard, but (chuckles) our lieutenant governor said... It's hard to quote him, because you know how when people say stupid things -- and our governor and lieutenant governor do that a lot in Pennsylvania -- it's hard to quote them exactly. But it was something to the effect of if you are out there saying the election is stolen or it's fraud, that's a lie, and you should lose your First Amendment rights, something like that. You know, very, very Marx-Lenin-y.